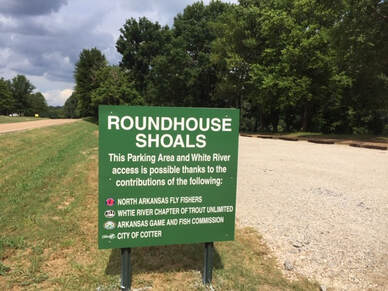 The City of Cotter, aka Trout Town U.S.A., now has an improved access and parking area at Roundhouse Shoals on the White River. This recent addition to the City of Cotter provides seventeen parking spaces and is a welcome sight to local and visiting river users who had been dealing with a river access in this area that was in dire need of repair and improvement. The potholes of the old access more closely resembled small ponds and it would not have been a surprise to see a mallard or two landing there.

Thanks to the collaborative efforts of the Northern Arkansas Fly Fishers, the White River Chapter of Trout Unlimited, the Arkansas Game and Fish Commission and the City of Cotter this area is being transformed from an eyesore to a source of pride for area residents and a welcoming beacon for visitors.

In 2012 the Northern Arkansas Fly Fishers began the process of installing some steps at the old Roundhouse Access to ease the walk of fisherman down the steep bank. NAFF members Mark Burgess and Joe Hanson were driving forces for this project, with Mark being particularly tenacious in his efforts to convince the Northern Arkansas – Missouri Railroad, the Army Corps of Engineers and the City of Cotter of the need for this improvement. Finally in 2014 approval was granted, a contractor employed and steps installed to help fisherman access some great fishing on the White River. The steps proved to be popular and the access was well used. In the ensuing two years the parking area degenerated to the point that action for its improvement needed to be taken.

NAFF members Mike Tipton, Tommy Hagan, Mark Burgess and Tom Emerick met at the access site in October of 2016 to photograph the degraded area and begin the process for its improvement. Mayor Peggy Hammock was contacted approached regarding this property and we they soon had contact information for Stan Risley, Superintendent of the Arkansas State Highway Department, Doug Mears, District Permit Officer for ASHD and Colby Rinker the Real Estate Manager for Union Pacific Railroad.

An improvement plan was needed and Mike Cantrell, Regional Access Construction Coordinator for AG&FC was able to provide a plan and a cost estimate for the installation. It was agreed that NAFF and WRCTU would share the cost of materials and the AG&FC would provide material transport and installation of the parking area. The plan and cost estimate were submitted to Union Pacific Rail Road for approval by their engineers.

The process for approval of the plan was drawn out over two years until November 2018, when the Lease Manager of Union Pacific Railroad gave their blessing to the project. They had finally responded in a positive manner to Tom Emerick’s numerous e-mails and phone calls.

In the spring of 2019 there was a meeting on site attended by Mayor Mac Carradine, AG&FC staff, Darryl Bowman, Tim Burnley and Eli Powers and TU and NAFF members Gary Flippin, TL Lauerman and Tom Emerick. The purpose of the meeting was to strategize how to move the project forward and implement the parking area plan. It was agreed that NAFF and WRCTU contributions would pay for materials and the AG&FC and the City of Cotter would provide in kind services for the transport of materials and the construction of the parking area and river access. The City of Cotter would administer the project contributions and submit payments when necessary.

Mayor Carradine decided to move the parking area upriver for money saving budgetary reasons purposes and for ease of providing another staircase access to the river. The result has been a tightly compacted parking area of seventeen spaces with four picnic tables on the riverside, a new staircase to the river and a gravel pathway to the previously installed staircase. Signage has been provided to acknowledge contributors to this project and the AG&FC has posted signs for fishing regulations and for practices to protect the river environment. During their efforts of installing this project the Cotter Maintenance Crew discovered another staircase access that they were able to expose and repair for use. The old parking area will be graded and seeded. Access to this previous parking area will be discouraged with the placement of large rocks. Future plans for this area will have a walking path with additional stairway access to the river.

The City of Cotter Mayor Carradine and Maintenance Staff and the AG&FC are commended for their efforts to install the parking area and access. Please visit and use this new access and show your appreciation by leaving it without trace of your presence. 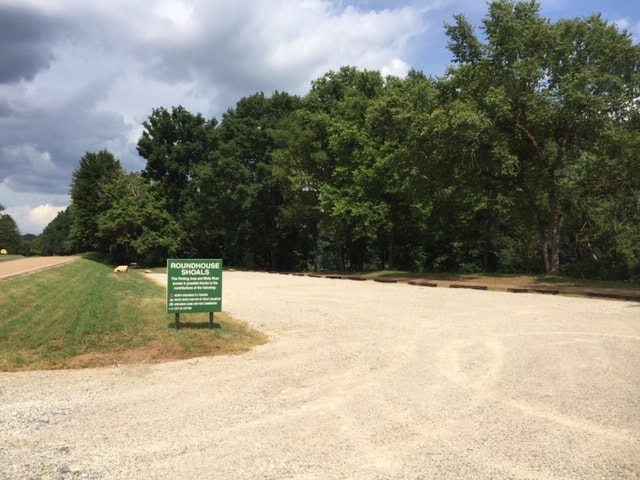 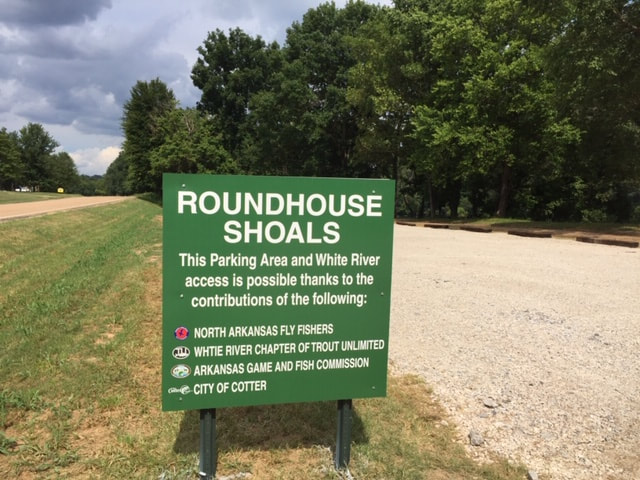 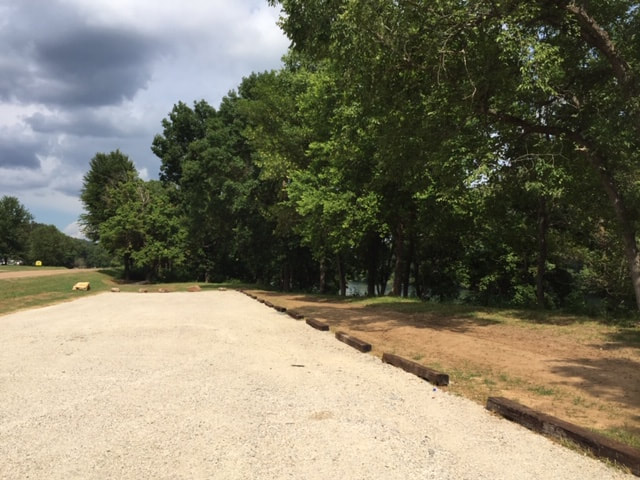 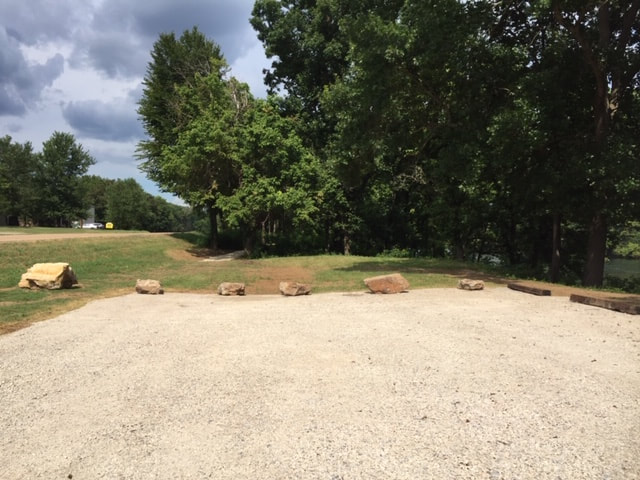 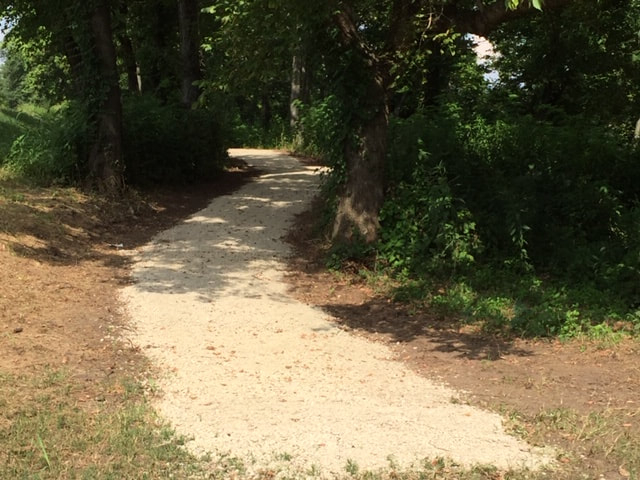 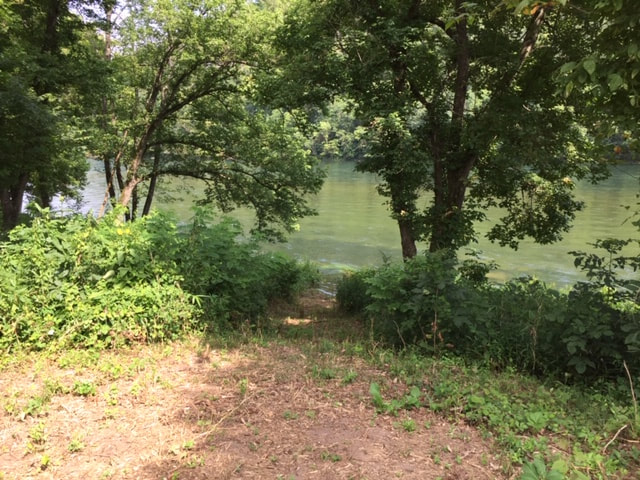 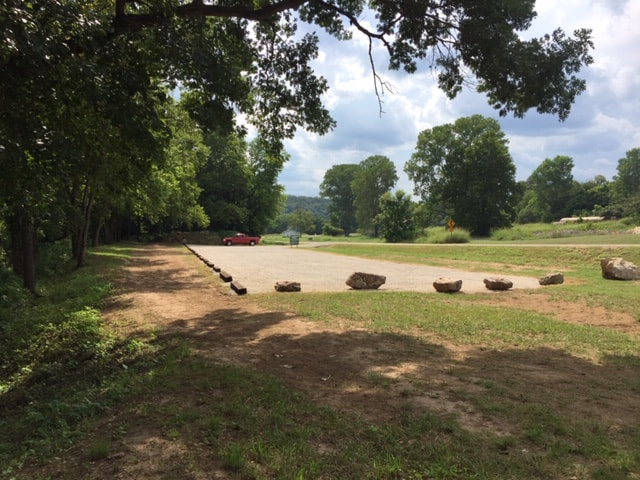 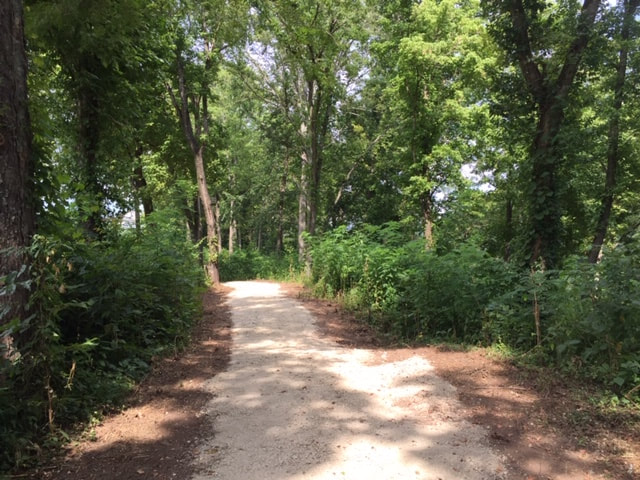 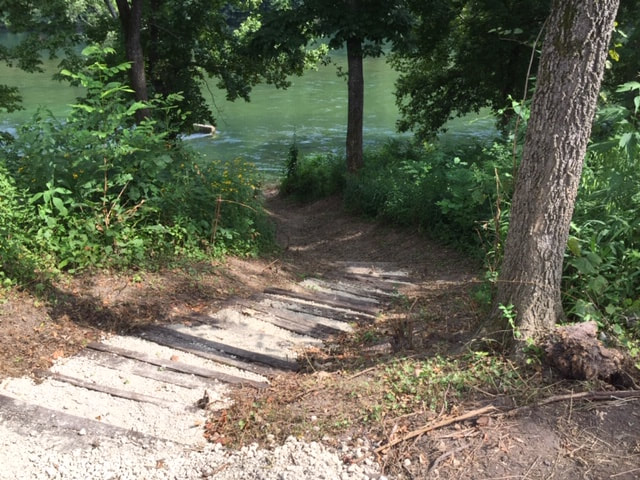